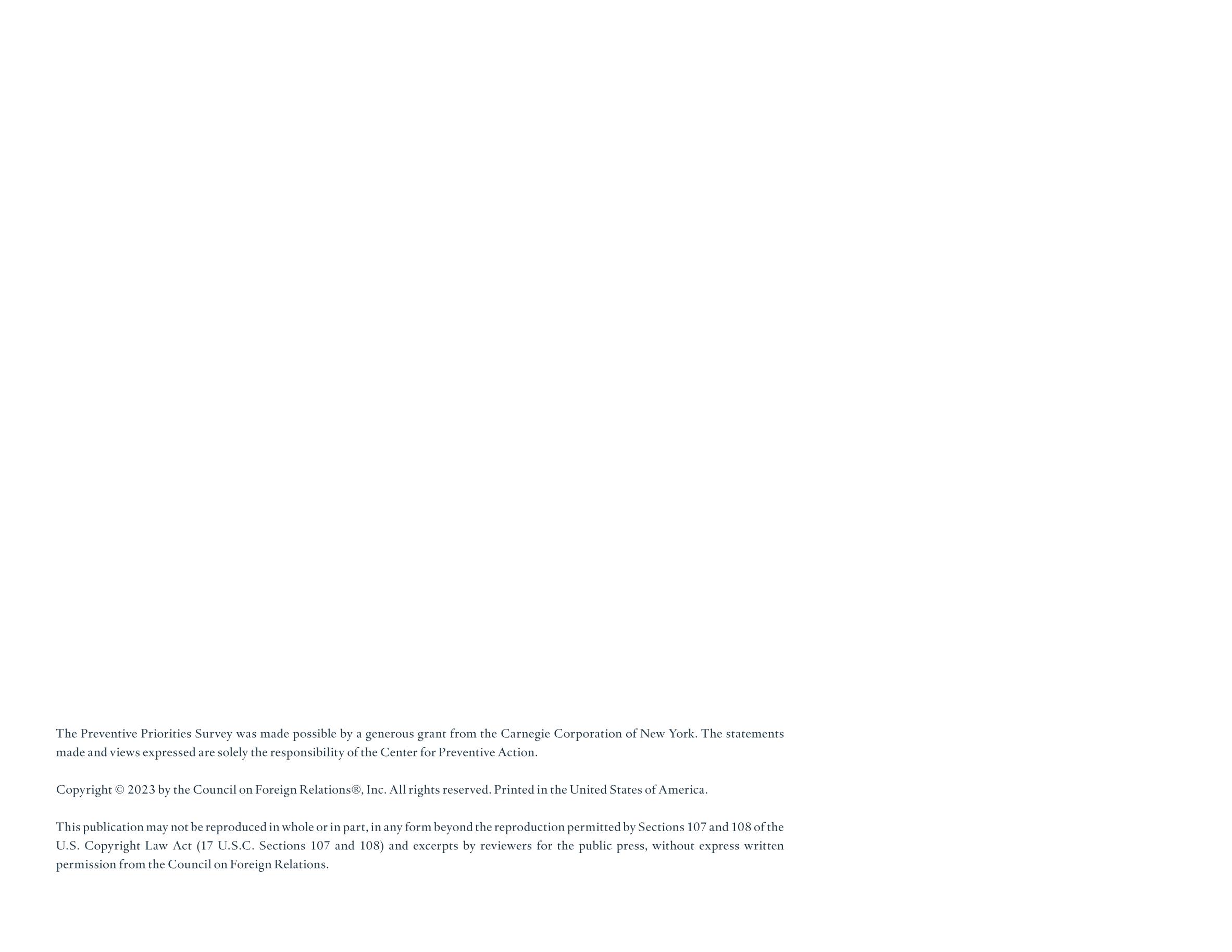 Notable takeaways from this year’s survey include the following: • For the first time since the PPS began fifteen years ago, the possibility of a foreign terrorist organization inflicting a mass-casualty attack on the United States or a treaty ally was not proposed as a plausible contingency for the coming year. The 9/11 era, when foreign terrorist-related threats dominated the results of the PPS, appears to be over. The possibility of a highly disruptive cyberattack targeting U.S. critical infrastructure by a state or nonstate actor remains the top homeland security concern.

• The majority of Tier I contingencies now concern either potential flashpoints involving the major powers (e.g., a cross-strait crisis around Taiwan, escalation of the war in Ukraine, and instability in Russia) or nuclear weapons development by Iran and North Korea. The risk of the United States becoming embroiled in a military confrontation with either China or Russia (and conceivably both simultaneously) has risen. Although no Tier I contingency was judged to be very likely in 2023, it is still sobering that each was given an even chance of occurring.

• PPS respondents define what matters to U.S. interests much more narrowly than in recent years. Not since 2017 have there been so few Tier I priorities—seven in total. Two contingencies that warranted this ranking last year, Afghanistan and Venezuela, are now judged to be Tier II concerns, while Haiti and Lebanon have slipped to Tier III—even though conditions in those countries have either deteriorated or not changed significantly in the interim. Furthermore, over half of all the contingencies surveyed in the 2023 PPS now qualify as Tier III priorities—an unprecedented number. Even though the majority were judged to have an even chance of occurring, the likely impact of most on U.S. interests was assessed to be low. Tier III contingencies include three involving countries selected by the Joe Biden administration to receive special attention and long-term U.S. foreign assistance under the 2019 Global Fragility Act (GFA)—Haiti, Libya, and Mozambique. (The other two GFA priorities—Papua New Guinea and coastal West Africa—were not even proposed for the 2023 PPS.)